Where is Merida Mexico located?

Where is Merida Mexico located and why is it a popular tourist destination? Find here answers to these questions and fun facts about Merida.

Merida is a city in the northwestern part of the Mexican state of Yucatan. It is located within the Yucatan Peninsula. Merida Mexico is the largest city, both in the state and in the peninsula.

Manuel Crescencio Rejon International Airport (MID) is the nearest airport in Merida Mexico. It is formerly known as Merida-Rejon Airport.

Read also: Best things to do in Merida

Where is Merida Mexico on the Map

How to get to Merida

How to get from Cancun to Merida

1.  Merida Mexico was founded in 1542 by the Spaniard Francisco de Montejo. The city was built on top of the Mayan City of T’Ho.

2. The nickname for Merida Mexico is “La Ciudad Blanca” or “The White City.” Some people say it’s because many of the buildings there were made of white limestone. Others would say it’s because Merida excels when it comes to cleanliness.

3. The name Merida is not unique to Mexico. It shares the same moniker to cities in the Philippines, Spain and Venezuela. All of them were named after the Spanish town of Merida located in the Extremadura region of Spain.

4. Merida Mexico was once one of the richest cities in the world. It was all thanks to the abundance of the henequen plant in the area. The hard fiber cultivated from this plant is used to make twine and rope.

5. Thinkers credit the geographical isolation of Merida Mexico for the rich culture it has until today. In fact, it was awarded as the American Capital of Culture in 2017.

Yes, Merida is considered one of the safest places in Mexico. The level of safety in this city is even often regarded as among the highest in the continent. Entrepreneur ranks Merida as the safest city in Mexico to live in.

Does Merida Mexico have a beach?

There are no Merida beaches because the city is located inland. However, there are plenty of nearby beaches which are a short drive away from the city.

How far is Merida Mexico from the beach?

The nearest beach to go to when coming from Merida Mexico is Progreso (43 kilometers.) This beach is about 40 minutes away from town. Other nearby beaches are the quiet Celestun (104 kilometers,) the upscale Chicxulub Puerto (44 kilometers,) and the small beach village of San Crisanto (77 kilometers.)

What is Merida Mexico known for?

Merida Mexico is known for its culture which is a rich mix of Mayan and colonial influence. You can see it from the sacred temples, ancient ruins, natural wonders, and art centers that can be found here.

Previous
How to get from Cancun to Isla Mujeres? 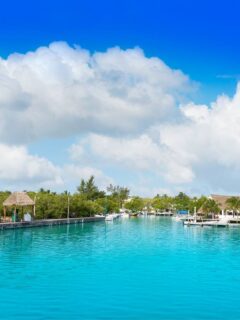 Next
Where is Holbox Island Mexico located?