Legends say that a young girl once found a small statue on a rock and took it home. The next day she found the statue back at the rock. Many people wash themselves with the water and drink the healing water from this rock; it never stops flowing and is very clean.

The “Basílica de Nuestra Señora de los Ángeles” (Our Lady of the Angels Basilica) is a Roman Catholic basilica in Cartago, Costa Rica.

It is devoted to the “Virgen de los Ángeles” (The Lady of the Angeles), a small statue of the Virgin Mary carrying the infant Jesus, and was built in 1639.

Because of the dark color, the statue is sometimes also referred to as “La Negrita”. The basilica was partially destroyed by an earthquake and was restored with a unique mix of colonial architecture as well as 19th century Byzantine style.

Every year millions of people pilgrim on August 2nd to the Basílica to pay respect to Costa Rica’s patron Saint “La Negrita” or the “Little Black One,” a 15 cm tall statue of the Virgin Mary. Some walk straight for eight days and finish the last few hundred meters on their knees.

According to legends, on August 2nd 1635, a young girl found a small, black stone statue of the Madonna with a child on a rock in a forest outside the city.

The next morning however the statue was again back at the rock. During the construction, the church was several times destroyed by earthquakes untill it was decided to built it at the location where the little girl found the statue.

They were able to finish the construction and many people think that the earthquakes were signs that the Lady of Los Angeles wanted the basilica to be built there.

The word spread and the Virgin became Costa Rica’s patron saint. The original statue is now kept in a golden shell inside the basilica.

People who visit the basilica drink and wash themselves with water from the rock on which the statue was found.

They fill bottles in the shape of La Negrita with the holy water and poor people carry empty bleach bottles or juice jugs to carry their water home. 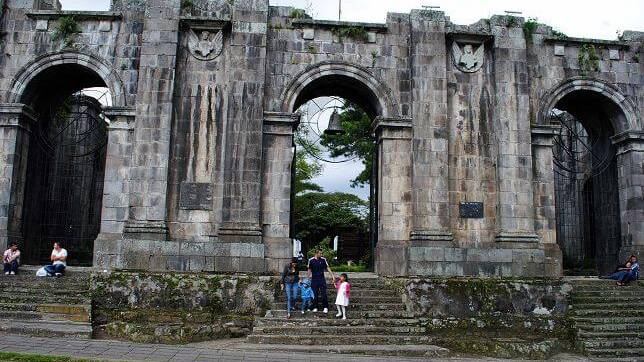 Previous
Ruins of the Temple of the Santiago Apostol Parish 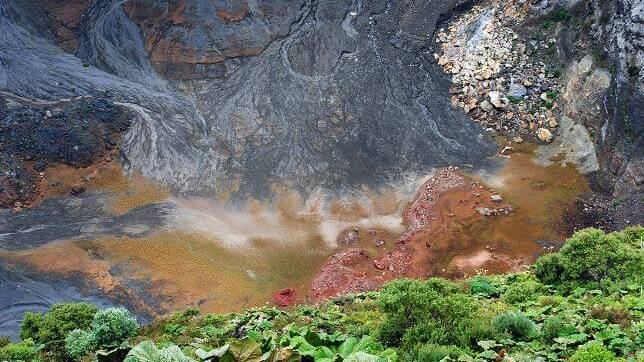