Wondering which is the best time to visit Vancouver? Learn more about the weather and activities in Vancouver BC depending on the season of your visit.

If you ask around about the Best time to visit Vancouver BC, chances are people will tell you to come during summertime.

What if your trip doesn’t fall during this season?

Best things to do in Vancouver

Good thing it is generally a good idea to come to Vancouver any time of the year.

With lots of things in store for the curious traveller, Vancouver BC is a teeming tourist destination no matter which month and season you come in.

Climate: The coldest days in Vancouver are here.

Temperature: Highest temperature is at 6 degrees Centigrade while lowest is at 1 degree Centigrade.

January is one of the rainiest months of the year in Vancouver. While this may serve as a dealbreaker for outdoor enthusiasts, Vancouver still has many indoor activities to offer.

What’s a better way to enjoy the cold weather than to go on a food trip at the Dine Out Vancouver Food Festival?

This two-week gastronomic celebration is one of the highly-anticipated events every January.

Many restaurants participate and present their menus to people who would like to sample the best of their dishes without having to splurge.

Each year, the place is designed with festive lights and artistic decorations that change every time. January is the best time to visit Vancouver if you wish to avoid the holiday crowd.

Climate: It is the end of the winter season.

The cozy weather in Vancouver during February attracts couples who are on a romantic getaway for Valentine’s Day.

The city is in its sweetest, too, with many establishments offering special packages fit for the occasion and season. February is the best time of the year to visit Vancouver to enjoy cuddle weather with your loved one.

Go on a wine tour or bike around the neighborhood. Visit indoor galleries or spend time under the stars. The choices are endless for romantic travelers.

February is also the time for corporate events and annual social gatherings celebrating different highlights of the city.

Climate: It is the start of spring season.

It’s off season in Vancouver this time of the year, so expect less crowds and a more relaxed travel setting.

While the threat of possible storms stands nearby, it is still a good idea to consider going to Vancouver this time of the year especially for those who are traveling on a budget.

Before winter officially ends, head over the Grouse Mountain and take part in the 24 Hours of Winter.

Ski, skate, and snowboard to your heart’s content as they pack Grouse Mountain with winter activities that run until the wee hours. Be sure not to miss the Torch Parade.

Festival du Bois also happens this month. It is the best time of the year to visit British Columbia if you are fond of Canadian folk, Celtic and world music.

This event is widely attended by many Francophone festival enthusiasts.

Climate: The spring season is in full bloom.

Plan your itinerary carefully especially when it involves a lot of outdoor activities. Vancouver is rainy in April, and this may affect your plans of enjoying nature trips and the like.

April, though, is when the cherry blossom trees bloom in Vancouver, making way for the annual Vancouver Cherry Blossom Festival.

This is the best time to visit Vancouver Canada if you are an aficionado of these beautiful blooms.

Bike and sightseeing tours are arranged by the neighborhood so people can enjoy being in the midst of the pink blossoms. The Sakura Night happening in Stanley Park is a must-visit for anyone who is fond of Asian cuisine.

Vancouver Weather in May

Climate: Days and nights get warmer as spring season ends.

People start flying into Vancouver to enjoy the great weather that comes in between the end of spring and the start of summer.

Several food venues open this time of the year, so it is generally the best time to visit Vancouver for a gastronomic exploration.

The popular Richmond and Shipyard Night Markets start serving the neighborhood in May.

May is also the month of the highly-anticipated BMO Vancouver Marathon, a scenic race with routes that wind down famous landmarks, green parks and the lovely oceanside.

Climate: It is the start of summer in Vancouver.

Summer may be here, but still expect a few rains during the month of June. The Vancouver peak tourist season kicks in during this month, so it is wise to book ahead of time if you plan on visiting Vancouver BC in June.

During this event, high profile artists come together to celebrate music with fans around the world, bringing in several concerts in different venues across Vancouver. Also around the corner is the Vancouver Craft Beer Week.

The Vancouver peak tourist season is in full force as the weather starts to get hot and dry this time of the year.

People come to the city to celebrate Canada Day here, so the whole neighborhood is filled with both locals and tourists going about their days.

July is the time when you’ll see many locals heading to Jericho Beach – not to swim but to celebrate the Vancouver Folk Music Festival.

For three full days, get to see local artists and international stars jam with the crowd. Alongside these concerts are food stalls and craft markets that appeal to everyone.

Climate: Summer is ending and the rainy season is coming.

You can enjoy more sunny days and less rainy ones when August comes. Take advantage of this weather and head to outdoor areas such as the Stanley Park, a popular destination that can be enjoyed by all members of the family.

It is a good time to visit the Bard on The Beach Shakespeare Festival which, at this time, has been running for two months now. This worthwhile event is both recreational and informative.

The month of September in Vancouver tends to get rainy during the last weeks, so if you are planning on doing any outdoor activities, it is best to do so at the start of the month. The beauty of fall season is very evident this time of the year.

September is a great time for film lovers and makers. The Vancouver International Film Festival, one of North America’s biggest film festivals, happens this month.

Climate: The autumn breeze gets colder and rain is expected.

If you don’t mind traveling to gray clouds and gloomy weather, head to Vancouver during October.

Besides, there are a lot of indoor activities which you can maximize – and many of these are worth traveling to. Think museums, libraries, indoor pools, and huge aquariums.

Vancouver transforms into a huge spooky place as the entire neighborhood makes way for Halloween celebrations.

If you are into this kind of event, schedule your trip to land in October so you can take part in haunted Vancouver tours and ghost tours. Cap of your experience with the lively Vancouver Halloween Parade.

Climate: It is a very rainy month.

November is considered off-season in Vancouver as holidays have yet to start and snow is yet to build up.

A lot of things that you plan on doing in Vancouver during November is highly dependent on the day’s weather. No wonder it is the least preferred month to visit Vancouver BC.

If there is snow, you can enjoy a nice day of winter sports. The ski season may start anytime this month, so the Grouse Mountain will be set to open.

There are also Christmas attractions that open as early as this month, so it would be nice to check those out before the holiday crowd comes in.

Some of the events happening this time of the year include the Vancouver Eastside Culture Crawl and the Hopscotch Festival.

Climate:  It is the start of winter season. Rain is frequent.

Temperature: Highest temperature is at 6 degrees Centigrade while lowest is at 1 degree Centigrade.

At five in the afternoon, the whole of Vancouver is already covered in darkness. Make sure to plan your outdoor trips that require daylight accordingly.

While this cuts your sightseeing tours short, it extends your nightlife plans to a couple of hours in.

Christmas season is a magical time to be in Vancouver. Be sure to check out the Vancouver Christmas Market for a day of good food, great finds and a generous dose of festive fun.

Christmas at Canada Place is also a must-visit for the family. One of the main events in this place is the giant gingerbread men and the massive well-lit Christmas tree.

What’s absolutely not to miss in Vancouver during December is the VanDusen Festival of Lights.

See the botanical garden light up from the strings of Christmas lights decorating acres of lush land.

When is the best time to visit Vancouver?

The best time to go to Vancouver is either in July or August. The season is great both for exploring the outdoors and cozying up indoors.

These months are the warmest and driest months in Vancouver BC.

What are the seasons in Vancouver?

Vancouver enjoys all four seasons – winter, spring, summer and fall – although its weather is considered to be milder compared to the rest of Canada.

Winter in Vancouver runs from December to February. You will find the cold weather to be pleasant, with temperatures not reaching below zero.

Spring in Vancouver happens from March to May. Expect a lot of rain showers. The weather is expected to cool down towards the end of May.

Fall in Vancouver runs from September to November. Expect a cooler weather and a wet November visit.

What is the best season to visit Vancouver?

Many of Vancouver’s charms are found outdoors, so it is best to go during the summer season.

That way, you can enjoy a comfortably warm day under the sun with no rain.

When is the cheapest time to fly to Vancouver?

The cheapest time to fly to Vancouver BC is during the month of January. Avoid the months of March, April, and May if you are scouting for the cheapest flight.

It is essential to book ahead of time – at least three weeks prior to your trip – in order to get the best deals.

To help you plan your trip to Vancouver I put together a list with the BEST LUXURY HOTELS IN VANCOUVER and the BEST TOURS IN VANCOUVER. 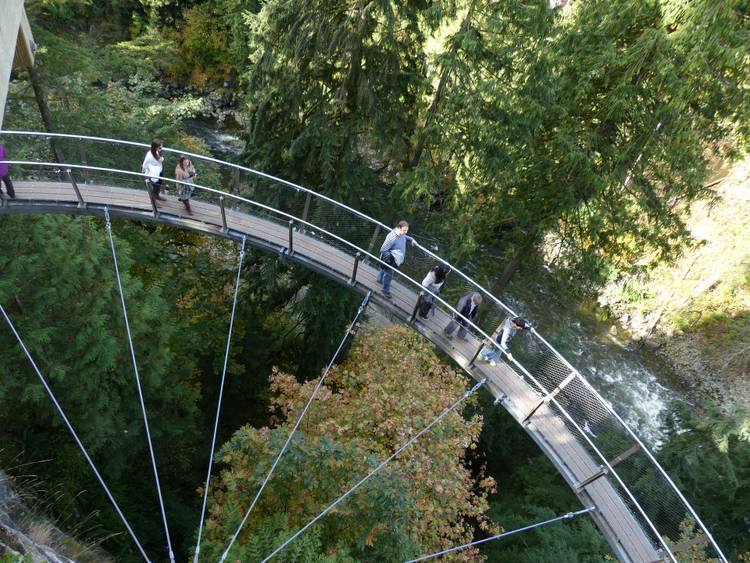 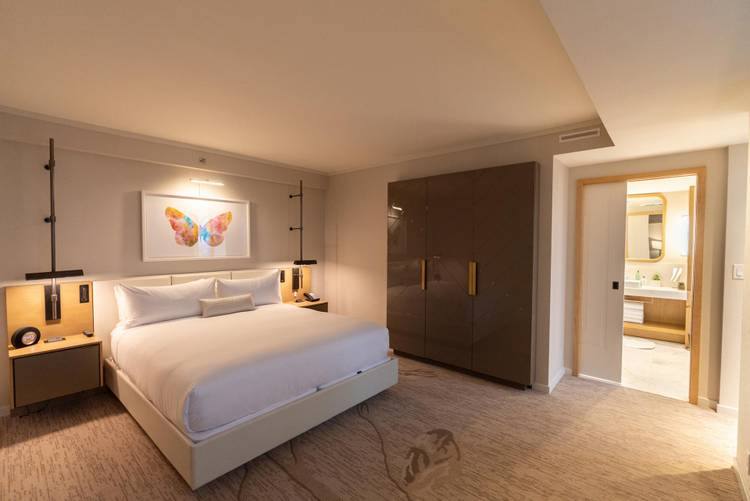 Next
Best Hotels in Vancouver, Canada